A Look Into London Rocks 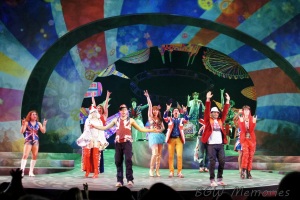 There is a new breeze blowing at Busch Gardens this year that captures your ears and eyes; much like strawberry fields and marmalade skies.  London Rocks marks the return of a live performance production at the park’s historic Globe Theater and it does so with a clear message:  “All You Need is Love.”

The show highlights the counterculture movement of the 60s, 70s, and early 80s.   During this time, music reflected the attitudes of those living in a very complicated, tumultuous time period. In order to explain the British culture through the decades mentioned, I would need to reference several books, articles, and documentaries based on the subject.  London Rocks, however, has less than 30 minutes to convey recognizable elements of the decade; 23 minutes to be exact.

So what can you fit into a half hour?  Let’s just say that the show is a powerhouse of visual images and subtle references, cleverly disguised as an easy-going musical about love and togetherness.  It is obvious that a huge amount of time and effort went into making London Rocks and therefore, I wanted to make sure I honored that work by breaking down the symbolism and theatrical elements that brings the show to life.

I decided the most logical way to share my interpretation of the show is visually. It is my hope that I will shed some light on the story, symbolism, and music behind London Rocks.

Please note, this is just my interpretation. 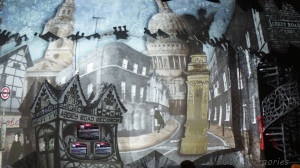 The opening animated sequence that plays while you wait.

While watching the animation here is what you need to take note of:

A sample of Monty Python Animation for Reference: 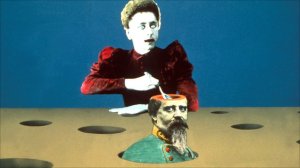 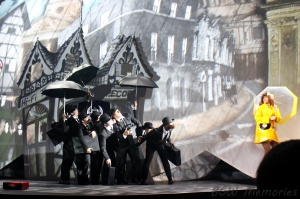 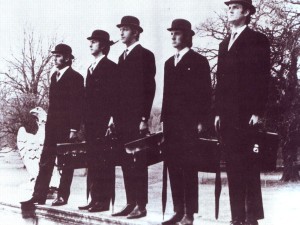 After a very exciting animation of riding the British Underground, Lucy emerges to head home.

Cultural Reference:  Lucy lives on Arnold Lane which I picture as a reference to the 1967 hit from Pink Floyd called Arnold Layne; a song with a very extreme counterculture message for the time.

Side note:  Lucy plays the record and starts to sing and dance in her room by herself.   The song is “It’s Only Rock n’ Roll (But I like It) by the Rolling Stones.  (1974)

Lucy has a crush on the Rock Star

Lucy is in Love 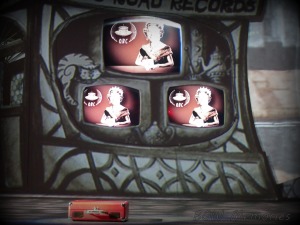 (This is not the actual animation for this scene. I am using this one to have a visual reference.)

An older Lucy Meets Guy inside the Record Store.

If you want it, come and get it.

Lucy and Guy fall in Love

Running towards their future together

Lucy and Guy Get married!

Background during the Wedding Reception. 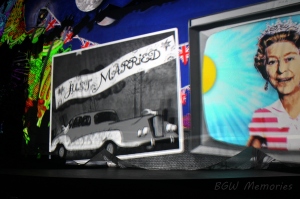 To save time, I am combining all three animated sequences: 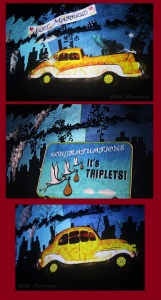 Lucy and Guy have Triplets

The Triplets ride in the backseat of Lucy & Guy’s car 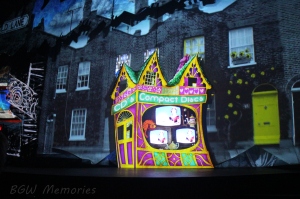 Interlude from the Queen 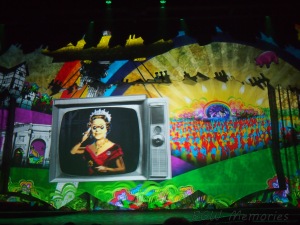 Their children have grown up. The 1980’s have arrived.

Lucy and Guy having Marital Problems

They can work it out.

Love is all you need!

I was a child of the 80s and all I knew of the 60s and 70s was what I learned through TV and my parents. Thankfully, my husband  introduced me to music from the era.  Not only did I learn about the the complexity and messages of the time, but I also realized that all the music I loved in the 80s and beyond stemmed from the radical change in philosophy and styles from the 60s.

That decade was huge in the development of the world. The time from 1960 to the 80s  faced huge turmoil; war, nuclear threats, assassinations, and the uncertainty of what will be.  Music, designs, and fashions all reflected the hope and desire to escape from the reality.  In retrospect, it was an artistic way to show  the multifaceted and complex nature of what direction the world would go.

Music binds us all together; generations, races, and sexes.  We can agree about music and art in a way that each song speaks to us on some level.  We relate to it; we put ourselves in the lyrics and find peace in the words.

Thanks to my loving husband, I not only learned about the classics of rock, but established a passion for a generation that I never experienced.  London Rocks is that window for all generations.  It is geared to teach us that love is the answer and no matter what, we can work it out.

I hope this article sheds light on all the symbolic meanings and details that went into this production.  As a film studies major with a degree in studio art and animation, I appreciate the concept on every level.  I felt with my knowledge, I could interpret some of the themes and meanings in an artistic way.

London Rocks is a loving tribute to all things British; not to mention, an era of tremendous change.  I can never know what it was like to live in the 60s, but the show gives all generations a glimpse.With history we gain wisdom and understanding.  We accept those who may differ from ourselves because we are no longer afraid.

To the creators and artists behind London Rocks, thank you for the work and passion put into this production.  Every time I watch the show, I keep seeing more and more subtle references.    Now if you could only add some Duran Duran, New Order, Erasure, and Pet Shop Boys to the list of artists; I would be even more ecstatic.

Many thanks to all those I did not mention.

Please check out all of Busch Gardens Behind the scenes videos and interviews on their You Tube Channel.